In Lonesome Traveller, he’s poetic, mystical, sometimes incomprehensible account of wanderings and odd jobs in the mid-1950s, the beat writer Jack Kerouac writes of a trip to Mexico:

“There is no violence in Mexico, that was all a lot of bull written up by Hollywood writers or writers who went to Mexico ‘to be violent’.”

“I know of an American who went Mexico for bar brawls because you usually don’t get arrested there for disorderly conduct, my God I have seen people wrestle playfully in the middle of the road blocking traffic, screaming with laughter, as people walk by smiling – Mexico is generally gentle and fine, even when you travel among the dangerous characters as I did – ‘dangerous’ in the sense we mean in America – in fact the further you go away from the border, and deeper down, the finer it is, as though the influence of civilizations hung over the border like a cloud.”

I recall the warnings from well meaning friends and family – There’s still time to change your plans/It’s not safe/It’s a dangerous place/Don’t go – before we boarded a New York flight in Christmas 2010 for a month long Mexican bus sojourn from Cancun all the way west to Guadalajara.

Though the notion of Mexico as a violent place is indeed “a load of bull” but still seemingly engrained in the American psyche more than fifty years after he wrote about it, Kerouac’s description of Mexico as “generally gentle and fine” is wonderfully precise.

There is little violence south of the shady border towns where the stories of gangs, beheadings, shootings and drugs garner garish headlines in American newspapers and stoke the flames of fear.

As travellers, we found the biggest danger in Mexico to be from a falling coconut while snoozing under the shade of a palm tree on an unspoilt sandy beaches on Isles Mujeres or Tulum.

Or perhaps from one of those mad windy bus journeys – where brakes are unnecessary accessories – up through the mountains to postcard perfect town like San Cristobel de las Casas, where the only sense of danger are the dolls, paintings and postcards for sale in souvenir shops depicting the Zapatista rebels with guns criss-crossed across their chests (and scary steely stares).

The colourful, quite streets of San Cristobel de las Casas beneath the mountains

I write in my journal of a day spent in this oasis of bright colours, cobbled quiet streets and lazy wanderings:

“Students and tourists abound.The streets are lined with brightly painted mainly single story houses and shops in shades of yellows, reds, blues and oranges and with slanting roofs of Spanish-style red tiles…the perfect place to wander, sit and sip a coffee or beer and people watch.”

In comparison to the constant pleadings, coercions and tourist tricks and traps in Thailand, India, Morocco and Egypt (all places I nonetheless loved), Mexicans are so laid back they hardly bother when it comes to approaching tourists.

On Isles Mujeres, the little island off Cancun, this lack of savvy was perfectly captured by a man offering boat trips to see whales:

“Wanna go on a whale ride?” he enquired as we strolled by one afternoon.
“No gracias,” we replied.
Silence, then he said sleepily:
“Lotta whales…” 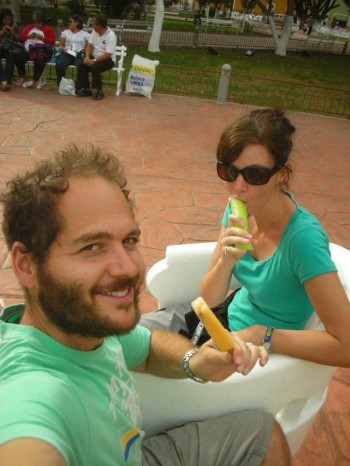 Ice creams in the park, Valledolid

No one harasses you in Mexico. Not in the small, sleepy afternoon siesta towns like Valledolid (where we visited the ruins of Chichen Itza and swam in the underground Cenotes) and not in sprawling, bustling Mexico City, the world’s best functioning mega-sized city.

Are there dangers in Mexico? Of course. I would not be so naive as to suggest otherwise. But the risks are small unless you’re smuggling drugs, heading for the seedy border towns or in the words of Kerouac going there “to be violent”

The Mexico I remember is that of little black haired men with moustaches; their plump wives pulling chihuahuas on leads, climbing steps to find churches painted in brightest pink and orange, wandering streets in shades of yellow and red, the little taco stands sizzling away by the side of the road, poodles sleeping in hammocks, glorious, colonial Spanish architecture, the boulevards of Mexico City, the murals of Diego Rivero, Frida Kahlo’s sad paintings in the blue house in Coyoacán, ancient Mayan ruins overlooking beaches and azure oceans.

Alive in colour, light and smiles. A sentiment Jack Kerouac would have agreed with, I think.

One thought on “Mexico is indeed “gentle and fine”, Jack Kerouac”