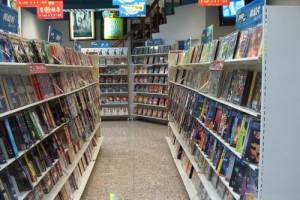 The joy of browsing for a movie…fading fast

We watched a lot of DVDs on our recent family holiday on Phillip Island, courtesy of the local video store. We found Phillip Island Video Hire by chance, on the second evening of our holiday, while taking a stroll after dinner. Behind the counter, the spectacled, purple-haired proprietress, wearing a tie-dyed T-shirt saved us from a twentieth viewing of ‘The Shawshank Redemption’ (in video format!) and the ultimate horror, enduring Jar-Jar Binks again and ‘The Phantom Menace’. Our holiday home was a cozy little cottage with a wood-burning fireplace, a TV the size of a postage stamp, one of those technological relics – a combination video and DVD player – and a small pile of reject videos and dust-covered DVDs. Thank god for the local video store! In the evenings, once our little girl was sound asleep, we’d brew tea, bring out the Tim Tams and stretch out in the darkened lounge, illuminated by the flickering orange fire, and watch a movie. (Our selections included the excellent ‘Kill the Messenger‘, the very watchable ‘November Man‘ and Australian-made crime drama, Son of a Gun) While it’s perhaps not that surprising to find a video store still in operation in a coastal holiday town like  Phillip Island (alongside second-hand bookstores and surf shops) in the suburbs of Melbourne and around the world, video stores are dying out in their droves, losing customers to a plethora of cheap video streaming services (Stan, Presto, Netflix, iTunes to name a few) that deliver movies instantly to your home TV, illegal downloading and DVD piracy. Rising rents have also hurt. In the past six months, two local stores – a Blockbuster and a Video Ezy  – have closed in Niddrie, leaving our northern suburb without a video store. (For more stories on video store closures read here, here and here). In place of our local Blockbuster, there is now a giant Pet Warehouse (with DIY dog wash) while a little further down the main road, Video Ezy has been consumed by the neighbouring medical centre. Like the demise of newspapers, the internet or ‘technological progress’ has killed the suburban video store – what was once a fixture of every retail strip, high street and shopping complex alongside Chinese takeaways, bottle shops and pizza joints. More than that, it’s killed a tradition that I, as a child growing up in South Africa in the late seventies, eighties and nineties, remember fondly. In those day, a trip to the local corner video store in Germiston – a mining town about 20 minutes from Johannesburg –  was something to get excited about. It was a family outing!

We had a Betamax player, similar to this

Our store, Cachet Video, rented out not just movies, but video players as well, firstly Betamax and later VHS players, decades before the arrival of DVDs. I remember, fondly, our top-loading bulky brown Betamax player with a remote control that connected to the machine by cord and which was at one point, the envy of our street. There was the fun of browsing and choosing and I loved turning over the age-restricted movies – when no one was looking – to see what scenes from the movie were on the back. The video store proprietor stood behind a counter in the corner, like the lord of home cinema (also the owner of the attached convenience store South Africans call a ‘cafe’), who would pull out a hand written card bearing our account information when the time came to exchange our empty boxes for actual movies. Having checked we still had credit, he would then disappear into a cavernous back room and return with the precious movies.

At one time ,the premises of Cachet Video, Germiston, South Africa

A rental transaction always concluding with my mother or father asking: “How many moves do we have left on our account?” Being a conservatively-minded family, my parents only allowed age appropriate selections, but I confess, that on holidays, when my parents were at work and my siblings were elsewhere, I’d race down to the video store on my maroon-coloured 24 speed bike, rent a movie like Police Academy or Revenge of the Nerds, where there was a guaranteed fabled topless scene. The proprietor looked me up and down – shaking his head, or so I imagined – but never said anything when I sheepishly handed over the video box. Then I’d race back to watch the film, fast forwarding to the ‘important scenes’ and then furiously cycle back to return the movie, before my parents returned home. Later in life, when slightly more mature (and having a car), I made many trips to Johannesburg video establishments like Video Spot on Jan Smuts Avenue, Hyde Park, with its vast collection of art house films and foreign movies to choose from.I remember what I thought at the time were ingenious arrangements of films by actor (Clint Eastwood, Robert De Niro, Al Pacino etc), director (Coppola, Spielberg, Scorcese, Allen etc) and franchise (The Godfather, James Bond etc).

Later, living in London, there were numerous trips to the Blockbuster video store on Golders Green High Street  (now also closed). In the afternoon, we’d wonder down in a group to choose a weekend movie or two, stopping on the way back home at the local Turkish Shop for cheap wine, pita, dolmades, dips and snacks. On one occasion, we forgot to return a movie before going on holiday for three weeks – the Blockbuster bill was about 60 quid. Living in Sydney, my wife and I and often the dog walked up William Street, past the drunks and prostitutes to the video store in Darlinghurst to rent episodes of The Office and The Sopranos. In Melbourne, it was Blockbuster of Video Ezy (or Video Sleazy as some called it) where browsing the aisles for a movie became a regular weekend fixture, invariably accompanied by a Thai curry. Even in the comparatively boring Niddrie Blockbuster, there was always the $2 section of classics, where you could find an old Woody Allen or re-acquaint yourself with a Clint Eastwood early Western. And there were the familiar faces – the small Asian man who ran the shop (and dished out the fines) who was close to tears when it closed down, the geeky guy with the half-formed goatee often on the phone reminding customers their movie was due back three days ago and the nerdy film buff – plus the huge selection of American candy, merchandise and figurines. Now all that’s left are a couple of self-service kiosks where there’s invariably someone standing behind you sighing heavily, while you try to choose something from a pathetically inadequate collection. So, I shed a tear for the video stores of my youth, my adolescence, my adulthood and my fatherhood and raise a glass to the nerds, geeks, rude bastards and eccentrics who worked in those stores. In fitting tribute, the classic video shop scene from Clerks:

2 thoughts on “In memorium: the suburban video store”