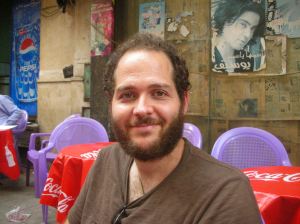 The recent wrongful conviction of Australian and Al Jazeera journalist Peter Greste and his two colleagues by a corrupt Egyptian court has stirred up memories of the week my wife and I spent in Egypt in 2010 as part of a round-the-world trip.

Before I turned to my own diaries to recall what I wrote about those days in Cairo and Alexandria in a hot October (just a few months before the start of the Arab Spring) I was moved by an re-collection of Cairo by a colleague at the Australian Financial Review, Tony Walker, who lived there as a foreign correspondent between 1983 and 1994.

My own memories drift back to my Cairo home at 19 Gabalaya Street, Zamalek on the Nile, where I lived securely and contentedly for 10 years surrounded by Egyptians who were my friends, including my assistants, Hoda and Shahira, my late ­tennis-playing friend, Eduard Malek, who was killed in a road accident in the office ­Mercedes I had bequeathed to him at the end of my assignment…In my apartment building resided some of Egypt’s foremost citizens, including Samia Gamal, the Arab world’s Margot ­Fonteyn of belly dancers, and Faten Hamama, the region’s Sophia Lauren and first wife of Omar Sharif.

Mr Walker described the case made against Mr Greste and his colleagues as a “judicial farce” and concluded, mournfully: “Egypt, I do not know you”.

Cairo, for anyone who has not visited is a manic place – perhaps the most manic in the world – crammed with 20 million or so people (no one seems to know exactly how many), packed with buildings new and ancient in a metropolis that never seems to end and roads clogged with cars, trucks and busses, where you cross at your own peril. Cairo has both crumbling majesty in its ancient monuments – the pyramids of Giza the most famous – bustling trade in the markets of Islamic Cairo and touch of the modern city in its efficient metro system, one of only two in Africa.

But my abiding memory of Cairo was of playing the Western fools, with our map spread open on Tahrir Square trying to find our way to the Nile or the Egyptian Museum and caught out at every turn by scam artists and confidence tricksters.

We were scammed almost every day in Cairo – nothing of the amount to ruin our trip – but enough to leave a sour taste in our mouths when we flew off to a “sedate” (by comparison) Mumbai.

The opening remark in my journal on Wednesday, October 6th (our fourth day in Cairo) begins: “We awoke with the intention not to be scammed today.”

Of all the cons played on us – from the jovial family man Abdullah who “just happened” to bump into us after his hotel shift on the way to catch a bus to the pyramids and who steered us straight into the arms of US dollar charging camel ride purveyor, to the man who led us straight to his uncle’s perfume shop rather than where – as promised – the felucca boats departed on the banks of the Nile,  the saddest was perpetrated by a kindly looking old man with white beard and moustache (think the Egyptian Colonel Sanders), who caught me out on our second evening in Cairo, when I was walking on my own near Tahrir Square (my wife was still battling a cold and had stayed in the hotel room that evening).

A very expensive camel ride at the Pyramids of Giza

I had just returned back to the centre of Cairo after having a wander around the dark lanes of Coptic Cairo (home to ancient ruins, churches and synagogues of Cairo’s Catholic and Jewish descendants dating back 1500 or more years) with its mud-brick homes. tiny convenience stores and less than friendly stares of the local children.

I emerged from Sadat Station looking for somewhere to eat when I was stopped by a portly, balding man with a white beard and glasses who asked me where I was from.

“Not a minute had passed and I found him walking alongside me as if we were old friends,” – I wrote in my journal. “He looked so innocent,” I added.

At one point during our walk he stopped to write my name out in Arabic. Later he told me he played the organ in the church and that he was a sculptor.

At some point, I told him I was hungry but could not find somewhere to eat:

Next minute I was tucking into chicken, rice and vegetables. He watched me and said little except to enquire if the food was any good. He later stepped outside to chat to the owner.

After the meal – all he had was a soft drink – nothing was paid in the restaurant and in my naivety as we left, I wondered if perhaps – out of the goodness of his christian heart – he had paid for me. I wrote:

As we walked on, he said I owed him 43 Egyptian pounds, not a king’s ransom, but double what the meal would have cost me anywhere else. When I gave him a 50 pound note, he then had the temerity to ask if he could keep the change. I said no, but he still short-changed me by 3 pounds.

I walked back glumly to my hotel to recount the story to my wife. I felt both stupid and sad.

Looking back at it now, in the wake of the Arab spring which promised so much for Egypt and its struggling people, I feel mostly sympathy for the little old man who conned me out of a few pounds.

I wonder what has happened to him and if he is still trying his routine on  unsuspecting tourists – if any still visit in the wake of 2013 military overthrow and the terrible situation of Peter Greste, his colleagues and thousands of others arrested, tortured and murdered.

It is of my wife and I running to catch a bus outside the Egyptian Museum guided by our new friend Abdullah urging us to jump on the rickety thing while it was still moving.

Along side was a man throwing his ten bags of groceries on to the steps of the bus before leaping on himself (buses in Cairo, we learnt slow down but don’t stop to let passengers on).

Safely on the bus, I found myself staring at a little kid – perhaps 12 – sitting in the ticket seller’s seat as we sped past Cairo University who demanded I buy a ticket from him.

Just before I handed over a few coins, Abdullah stopped me.

“He is not the ticket seller, just some kid.”

Having reassured us that he was our guardian, he then proceeded to scam us.