I was dismayed – no gutted – to read a story in The Australian newspaper last week.

It’s first paragraph said: “More than 70 per cent of Australians support the Abbott government’s Sovereign Borders Policy, including the idea that boats should be turned back when safe to do so.”

This information was correctly reported and seemed to confirm that, depressingly, most Australians have bought the propaganda – dished out regularly from both sides of politics about asylum seekers.

This is, that asylum seekers are queue jumpers, possibly terrorists and that if they want to come to this country, they should get in line and wait their turn – regardless of the circumstances in their home country. If they arrive by boat, they should be sent back to where they came from.

This sentiment was spelled out 13 years ago when former prime minister John Howard said in his election victory speech: “We will decide who comes here and the circumstances under which they come.”

He was referencing the Tampa affair, where a Norwegian freighter carrying rescued asylum seekers was denied access to Australia. This hard line attitude has been stamped into the heads of the voting public ever since.

But The Australian article conveniently forgot to mention another finding of the same Lowy Institute survey.

This was that the majority of Australians (57%) polled disagreed with the former Rudd government and current Liberal Party government policy that ‘no asylum seeker coming to Australia by boat should be allowed to settle in Australia’.

This statistic is nowhere to be found in Rowan Callick’s article – and which, if it were included, might have led to a different headline or at least told the full story.

Now, the margin of error in the poll was 3% so it could be that as many as 60% of Australians believe that asylum seekers who arrive by boat should be allowed to come and live in Australia, should there claims be genuine.

At worst 54% of Australians are opposed to the policy which is seeking to settle asylum seekers who arrive by boat on Papa New Guinea, Nauru or possibly even Cambodia in grubby cash-for-people deals.

So the end result is that I feel a little bit better about my country (of adoption) and my fellow countrymen.

But then again, reading numerous other articles and following the social media conversations, it is clear there are many Australians who feel like I do – that we are behaving abominably to the most desperate and needy in society.

Sadly though too many people appear to have been brainwashed following years of propaganda and believe – against all factual evidence – that asylum seekers arriving by boat are the first wave of potential invading hoards. 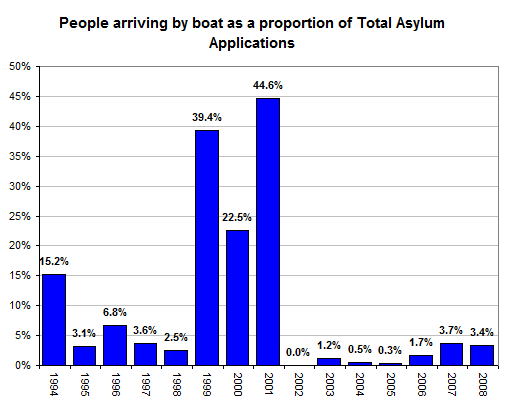 This is in no part due to the aforementioned article in The Australian, but also do to News Corp popular columnists like Andrew Bolt who regularly rounds of his tirades against Labor, the ABC, Fairfax, the Greens etc with thoughts like: “it is grossly irresponsible to allow thousands of illegal immigrants from countries very different from our own to crash our borders when we know it exposes Australians to extra risks they don’t want and never accepted.”

Or comments like this: ” Tens of thousands of ‘refugees’ would swarm each year through the Greens’ open door, more than we could safely accept, and the thousands rejected as refugees would not just go home.

All designed to stir up fear and hysteria of invading hoards and keeping John Howard’s 2001 message alive and well.

Reject the propaganda and form you own, educated view. Don’t be an ignorant fool.

(For more of my articles on this topic, go here.)