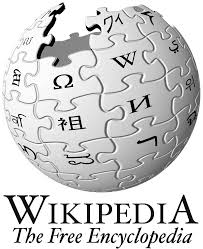 One Saturday morning in July, I received a call from Jennifer Nash, a single mother living in Logan City, south-east Queensland.

She asked if I would consider writing an article about her son, Jordan Nash, to  be posted on Wikipedia, the free user-sourced internet encyclopedia. She hoped a Wikipedia article would draw attention to his sad story. 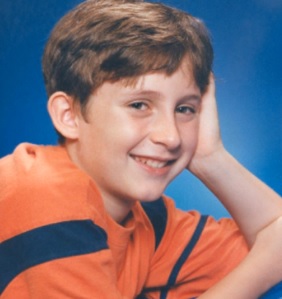 I said I thought I could help.

Her story tumbled out over the phone: she was at war with the Queensland government and the Federal Government since Jordan  – who has learning difficulties – was removed from school almost 10 years ago.

Jennifer claimed she’d been bullied, mistreated, harassed, ignored, hit with a $28,000 court bill and been the victim of judicial corruption because a court transcript – which proved she had been bullied and mistreated – had been “edited”.

Over the next few months I spent many hours on the phone with Jennifer, an exhausted, but determined and sincere woman, as she described what had been done to her.

Much of her and Jordan’s story appeared on unofficial media sites – essentially citizen journalism or blogging sites like Independent Australia  – but some of it did make it into the mainstream media.

In March 2011, WIN Television reported her address to former Queensland state premier Anna Bligh at a community forum at Toowoomba, where she said, quite eloquently, that “this soul crushing travesty of justice cannot be allowed to be covered up any longer”.

Last year she appeared in the  Brisbane Times, which incorrectly reported that she’d called then prime minister Julia Gillard “white trash” at a community cabinet meeting at Redbank Plains outside of Brisbane. The story, later corrected by the online newspaper, was that she had in fact told the prime minister “We are not white trash” as she explained to radio presenter Gary Hardgrave on radio station 4BC 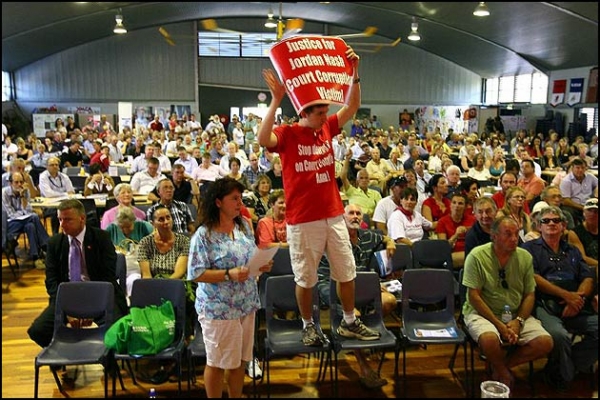 Jennifer and Jordan Nash speaking out at a community cabinet

Her battle reached the upper echelons of power this year, when both her and Jordan were  banned from attending a federal government community cabinet in Rockhampton by Jamie Fox, a government secretary working within the cabinet of then prime minister, Kevin Rudd, who was due to speak at the event.

Asked why she’d been banned, Jamie Fox responded via email that following checks by “security agencies” the government had been advised by the Attorney-General’s Department and the state police that she had a “history of disrupting public events” at other community cabinets and would not be permitted to attend.

“I am responsible for organising community cabinet meetings and this decision is taken on my authority,” wrote Fox.

Just what had a single mother without any financial or political muscle done for the Australian government to ban her from airing her views in a forum seemingly open to all?

The answer: stand up on a chair and demand justice for her and her son.

Hardly the sought of behaviour I thought to warrant a security crackdown or a sneering email from one of Kevin Rudd’s flacks.

In late August, I submitted the story of Jennifer and Jordan Nash to Wikipedia.

It was rejected by someone called “Sionk” who wrote:

Maybe there has been extensive news coverage of Jordan Nash, but there isn’t any presented here. The way this is written is also problematic, Wikipedia isn’t the place to make lengthy, one-sided (and poorly sourced) legal arguments.

Essentially, what Sionk was saying was that Jordan Nash was not worthy of  a Wikipedia article because his case had not been reported in the mainstream press and he was not someone of note.

I explained to Jennifer that no matter how many times I re-wrote it, I did not think her story would make it onto the pages of Wikipedia for the reasons above.

Every now and then I do a search for “Jordan Nash” wondering if Jennifer has managed to convince Wikipedia editors they should publish her story. But there’s still no entry.

Interestingly, many of the people who she accuses of mistreating her do have Wikipedia entries such as Queensland state member for Logan, Michael Pucci, who Jennifer says refused to help her, Supreme Court justice Jean Dalton, who dismissed Jennifer’s initial complaint at the Queensland Anti-Discrimination Tribunal (QADT) and former minister for education, Cameron Dick who dismissed further investigation into claims the court transcripts had been edited.

There’s some consolation for Jennifer. At least Jamie Fox, the government flack who barred her from the forum, doesn’t get a Wikipedia page.

(If you’d like to read more about Jennifer’s case, Independent Australia  provides a fairly comprehensive summary).