Gosh! (as  Napolean Dynamite would exclaim) where has the time gone?

One minute I’m finishing high school in Johannesburg, South Africa is stepping gingerly into a brave new era of democracy, Freddie Mercury had just died from AIDS and I’d decided to become an architect.

Flash forward nearly 22 years: I’m a newspaper journalist in Melbourne, (apparently the world’s most livable city, if you believe those sorts of surveys) with a bald patch, a blog and a family with three different passports (South African, Kiwi and Aussie) plus a few other bits and pieces.

It feels like a time to reflect, but not morbidly so, as I feel 40 is still an age of possibility (I’ll wait till at least 50 for melancholic reflections) plus I’ve been lucky, life has treated me more or less “pretty, pretty, pretty good” as my self-appointed mentor Larry David would say.

Of course I’ve just about given up hope of making it on the BRW Young Rich list (a list of the richest Aussies 40 and under), unless I do something drastic in the next couple of months – like rob a bank or win the lottery, but I think I can live with that.

Anyway, for nostalgia sake (and to poke fun at me relentlessly) here I am 22 odd years ago in the bottom right hand corner of this photo taken some time in the mid-1990s. 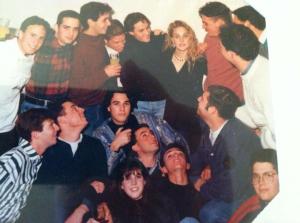 That’s me. The geeky, chubby face with glasses looking a tad sheepish on the periphery of things. Something of an outsider.

Hardly any of the people in this people are still living in South Africa; certainly I thought I’d be one of those who stayed behind (or at least left and came back). Instead I’ve joined the expat South African community that used to be called when I was in school, the PFP (not the Progressive Federal Party, but an acronym at the time for those ‘Packing for Perth’).

But have I succeeded? I have no idea.

Success of course is a personal thing and can be fleeting. You can accumulate vast sums of money and lose it very quickly, or build up your reputation on your achievements and status only for it to be smashed to smithereens by a rash decision or revelation about some horrible character flaw: think of the careers of Lance Armstrong or Rolf Harris and what they will be ultimately remembered for.

In many ways I feel I have succeeded – I’ve gotten married, have a beautiful wife and daughter and a son on the way, I overcame a seriously debilitating period of panic attacks that threatened my sanity about ten years ago while living in London (there is no greater fear in life than losing your mind I can tell you), I’ve  been lucky enough to see many interesting parts of the world (I think I am up to about 30 countries or so), had a to date fulfilling career in five different cities (Jo’burg, London, Sydney, Brisbane and Melbourne) and for the most part have been healthy, happy and well-fed.

But in other facets of my life I feel I’ve not: for one thing I have not built up any great wealth, nor do I own property or shares.

I don’t feel or act my age (both a good and a bad thing). I don’t pay enough attention in conversations. I’m often in my own world.

Of less concern I’ve also not yet published a book (or really written one either), I’ve haven’t yet been invited onto Q&A, had tea with Stephen Fry or discussed my anxieties with Woody Allen and I’ve still not bought a BMW (Everyone’s allowed one flashy, material craving right?)

But enough of that. Perhaps the Gods of fame and fortune will smile favourably on me yet.

I’m healthy and relatively sane and life is for the most part very good. I have time to read books, watch movies, listen to music, drink and occasionally be merry. Many people would be content with that.

So what have I learnt? Is there any wisdom I can impart as the big ‘Four Zero’ approaches?

And if every in doubt about life, watch Annie Hall for the opening monologue at least (the rest of the movie is pretty terrific too):

2 thoughts on “Approaching 40: Thoughts, reflections and some tips”