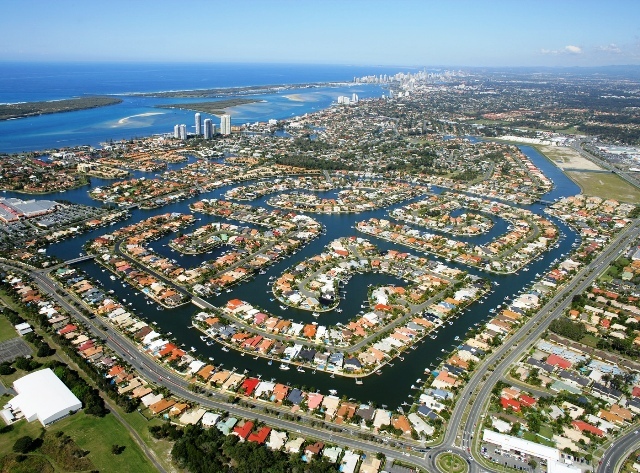 In 1972, work begun to turn 182 hectares of tidal Gold Coast wetlands north of the Southport Broadwater into a canal-lined residential subdivision.

Take a stroll along the Runaway Bay marina today with its views of the Surfers Paradise Manhatten-esque skyline and bobbing yachts and luxury cruisers at berth and you may pass by a portly, bald man with a strong South African accent. 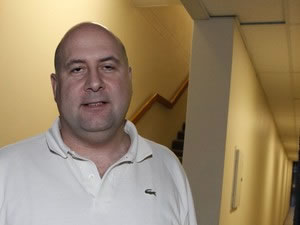 Barry Tannenbaum photographed in Sydney in 2009

It might just be Barry Deon Tannenbaum, now a resident of the palm tree-lined  suburb and the alleged operator of South Africa’s biggest Ponzi scheme, where he now claims to work as an insurance adviser.

When Tannebaum’s name last appeared in the Australian press more than three years ago he was a resident of Runaway Bay, having fled the South African Jewish enclave of St Ives, Sydney when news of the scheme broke.

Around six months prior to this mention in the Fairfax press, the Sydney Morning Herald had run as its June 13 Weekend edition front page story: Exposed: the Sydney man accused of a $1.5 billion scam. 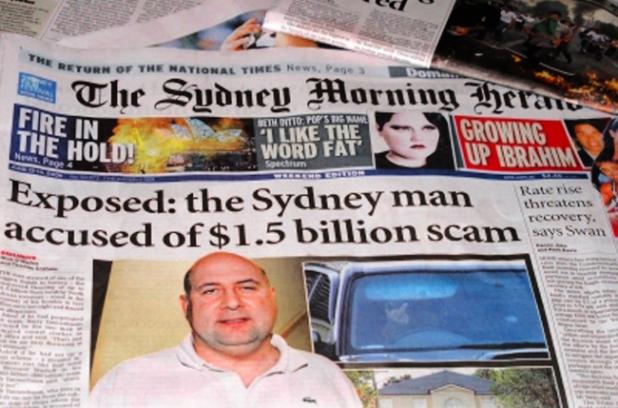 In the last three years, hardly a word about Tannenbaum has made it into the mainstream Australian media, despite new damning revelations in South Africa.

A failed attempt by the South African trustees of Tannenbaum’s bankrupt estate to take control of his Australian assets in the Queensland Federal Court in August last year also passed without mention, despite the judge noting that “substantial funds sourced from South Africa were transferred to Australian entities controlled by [Tannenbaum] and his wife”.

Funds allegedly stolen from hundres of investors  (some who lost all their savings) and squandered by Tannebaum before fleeing South Africa.

The tag of “mastermind” (one rejected by Tannenbaum) is given by none other than the South African Revenue Service (SARS), in recently leaked documents published on finance website moneyweb.co.za.

They reveals that he owes nearly $80 million in taxes, interest and penalties as part of undeclared income earned when he allegedly perpetrated one of the biggest corporate frauds in South African history.

A page from the SARS assessment

Despite these very large sums, they are only a fraction of a purpoted 15 billion rand ($1.5 billion) accrued through an alleged ‘Ponzi’ scheme that drew in 378 investors, including the wealthy and the not so wealthy in the close-knit South African Jewish community by inducing them to invest in his company Frankel International (of which he was the sole trustee), which traded under the name Eurochemicals.

Investors were enticed with offers of very high returns by allegedly forged purchase orders to supply the active ingredients for anti-retroviral drugs (used in the treatment of HIV and AIDS) to drug company Aspen Pharmacare – this in a country with one of the highest HIV infection rates in the world.

One purchase order was said to be for 700 million rand ($74 million) – denied outright by Aspen.

Adding believability to the scheme were two things; firstly that the Tannenbaum’s were a well-known, wealthy and respected Jewish family in South Africa and secondly, they have a deep connection to the local pharmaceutical industry – Barry Tannenbaum’s grandfather Hyme was the founders of South Africa’s largest over the counter pharmaceutical company, Adcock Ingram, now owned by Tiger  Brands.

The Tannenbaums sold their stake in the business in 1978.

Frankel Chemicals was subsequently founded in 1983 as an intermediary in the supply chain of drug compounds.

Between 2004 and 2009, Barry Tannenbaum, as director of Frankel, is said to have engaged the services of a number of high-profile businessmen in South Africa as “agents” – the original investors in the scheme and at the top of the pyramid – to sell the idea to other investors that they could more than double their money by making short term (8 to 12 weeks) advances for the purpose of enabling the purchase and importation into South Africa of pharmaceutical ingredients.

In a Ponzi scheme the early investors are paid dividends from investments made by later investors, rather than from any actual profit earned by the company.

I know of friends in South Africa induced to invest who lost all their savings. The sense of Tannenbaum’s betrayal of their trust remains palpable since the story was broken by South Africa’s the Financial Mail in July 2009.

The SARS investigation, which drew in all the major South African government institutions and auditors KPMG, came to the conclusion that “Tannenbaum was indeed the mastermind and operator of this illegal multiplication scheme”.

Following the article in the Sydney Morning Herald and other Fairfax papers in June 2009 as well as the ABC, Tannenbaum professed his innocence claiming in a letter to the press that “categorically” he was not “sitting with millions”.

“I have not amassed some fortune that I have spirited away, and in due course an audit will bear out this statement, if people are still interested in hearing the truth,” he said before all but disappearing from the public eye.

In January 2010, the last mention of Barry Tannenbaum in the Australian press appeared when Fairfax ran a story about him fleeing St Ives for Runaway Bay.

It was reported soon after an arrest warrant had been issued for Tannenbaum by the South African police. The short piece said he had fled “a stuffy little office above a strip of shops around the corner from his St Ives home “ only to “pop up in the Surfers Paradise suburb of Runaway Bay”.

And since then nothing.

As an Australian resident since mid-2007, Tannenbaum has received the full legal protections of the Australian judiciary system.

Efforts by South Africa to get Australia’s co-operation in the matter have proved fruitless.

In August last year, the Queensland division of the Federal Court declined an application by the South African trustees of Mr Tannenbaum’s bankrupt estate to administer and realise any assets he had accrued in Australia.

The ruling was made on the basis that South Africa was not the ‘centre of the debtor’s main interests’ as he had “severed all ties” with the country of his birth.

The Australian court documents confirm what is known in the SARS investigation – that Tannenbaum raised $390 million between 2004 and 2009.

Of this vast sum, just 0.05% was on-loaned by Tannenbaum for the purpose of purchasing pharmaceutical ingredients.

According to the court documents, 44.8 million rand ($4.78 million) was used by Tannenbaum for personal transactions “with a substantial portion being spent on gambling”.

He transferred US$31.7 million into an account held by Bartan Group Pty Ltd (Bartan – shortening of ‘Barry + Tannenbaum’), an Australian incorporated company, with an ANZ Bank account, now in liquidation.

Of this money, US$14 million was transferred into other entities controlled by Tannenbaum or to persons associated with him.

The sole shareholder of Bartan is another Australian incorporated company, Bardeb Nominees Pty Ltd, with shares held solely by Tannenbaum and his wife, Deborah.

Bartan was wound up by an order of the Supreme Court of New South Wales on 9 March 2010.

The Federal Court court documents note that a report issued about Bartan’s affairs in April 2010 was “noteworthy for its paucity of information concerning the affairs of that company” but does include assets of $586,523 (made up of $150 in cash with the balance being investments in two other entities) and contingent assets of some $21 million.

Telling Judge Logan remarks: “It may very well be that his decision to quit South Africa was inherently bound up with a desire not in the future to be dealt with under the law of that country in respect of his involvement in the scheme described and a related desire to enjoy the benefits of proceeds repatriated to Australia.

“It is not necessary in this proceeding conclusively to determine whether or not or to what extent he has enjoyed the proceeds but there is no doubt on the evidence that substantial funds sourced from South Africa were transferred to Australian entities controlled by he and his wife.”

Tannenbaum declined to reveal his Queensland address, claiming he did not have a permanent home, directing the court to a Sydney solicitor.

According to SARS, the money Tannenbaum earned was paid into various companies of which Tannenbaum was either a director or member – nine registered in South Africa and five in Australia, including the Bartan Group and Frankel International.

Julian Assange may be left to wolves by the Australian government, but Barry Tannenbaum, the alleged mastermind of a $1.5 billion fraud has disappeared from view and may very well be living the good life on the Gold Coast, enjoying walks along the marina, eating fresh seafood and feeling the warm sun on his skin.

While Bernie Madoff will remain in jail for the rest of his life, not a single charge has been laid against Tannenbaum in Australia despite a mountain of evidence back in South Africa.

He refuses to return to South Africa and face the charges, even though he claims he is innocent.

In Australia he appears to be protected and untouchable and living in, of all places, Runaway Bay.