The first time I heard radio shock jock Alan Jones, I saw him as well.

It was soon after I arrived in Australia and was living in Sydney. It was September 2004.

This bald man with a round, red face and bulging eyes would appear on breakfast TV and rant on about something or other in a condescending tone, hardly seeming to take a breath. It would all be over in a couple minutes.

I found it vaguely amusing – knowing nothing at the time about who Alan Jones was or his place in Australian media and politics.

Over the years, I’ve gotten to know more about him, usually in relation to something disparaging he has said about women, the Labor party, minority groups, aborigines or  when he has bullied or and taunted someone on his show or in public (as was the case when he attempted to turn a rabid crowd outside parliament against Fairfax journalist Jacqueline Maley).

But I was also surprised to learn that he coached a successful Wallabies team in the mid 1980s to a famous Grand Slam in Europe and Bledisloe Cup win in New Zealand.

He spoke last year to Leigh Sales on the ABC 7.30 report about his opposition to Coal Seam Gas drilling and its impact on fertile farmland, a stance I support, but also defended his comments about throwing women like Prime Minister Julia Gillard into chaff bags and tossing them out to sea.

Asked how he picked his “issues” Jones explained:

“My listeners are my best researchers, so a lot of my issues are taken from the correspondence. I answer over 100 letters a day and I gain information from them.”

And who are these people who write into Jones’s show and inspire his campaigns?

I contacted 2GB and asked them to send me the media kit they send out to advertisers, which would, I thought, give information about the demographics of his listener audience.

But I never got a reply.

Then I came across a 2006 webpaper by Clive Hamilton of the Australian Institute titled “Who listens to Alan Jones?”

I emailed Clive Hamilton and asked him, if perhaps he had updated his study.

He replied: “I am not aware of any update of the information in the report, but I
doubt the analysis would have changed much. In fact, with the greater polarisation of politics what I said about Jones’s listeners is probably more true.”

With that in mind, I delved into Hamilton’s study, which is based on a range of sources and surveys including Roy Morgan research.

So who does listen to Alan Jones?

“The typical Jones listener is an older Australian – 68% per cent are over 50,” says Hamilton in his report.

According to Hamilton his listeners tend to be concentrated into two groups: “pensioners and others with incomes around the average”.

Thirdly, they are god-fearing.

“Only 10% of Jones listeners say they have no religious affiliation compared to 26% of other Australians”.

Fourthly, they vote for the Coalition.

75% of his listeners supported the ruling Coalition government at the time.

More than three quarters (77%) of his listeners believe that the fundamental values of Australian society are under threat compared to 66% of all Australians” and they believe that crime is getting worse.

As for the racist element, according to Hamilton’s report Alan Jones listeners are “less likely to believe that Aboriginal culture is an essential component of Australian society”.

Those with long memories may recall that in 1993 Alan Jones described the choice of aboriginal musician Mandawuy Yunupingu, the lead singer of Yothu Yindi as Australian of the Year as an ‘insult’ and claimed that Yunupingu only received the award because he is black.

And who can forget his comments that many claim incited the Cronulla riots including remarks like: “We don’t have Anglo-Saxon kids out there raping women in western Sydney”.

Delve further into the research and more conservative streaks emerge.

Only 13% of his listeners believe that gay couples should be allowed to adopt children (the national average in 2006 was 37%) and nearly 50% believe that homosexuality is immoral – findings that must surely sit uncomfortably with Jones, given questions over his own sexuality.

The research also finds that Alan Jones shows incredible favourable bias towards the Liberal and National Parties, while criticising almost every policy from Labor.

A bias that has clearly not shifted one iota between 2006 and October 2012, given the parade of Coalition politicians who appear regularly on his show.

And that’s because they’re so much like him – just with smaller egos and a lot less money.

Perhaps one day he will acknowledge that who actually listens to his show are grumpy old white men living on the Western outskirts of Sydney, who ring in to his show to tell him the country is going to the dogs every time someone with a darker shade of skin colour or foreign accent moves into their neighbourhood.

But I doubt it.

Just recently he ran a poll on 2GB asking whether the massive irrigation farm, Cubbie Station in Queensland, should be sold to Chinese interests.

Not surprisingly, the vote was 99% against the sale.

I listened to a bit of the commentary that followed:

And so thinking of an image that best sums up the Alan Jones listener audience, I thought of the poster for the movie “Being John Malkovich”.

You know the one with all the people holding up a cut-out of John Malkovich in front of their own faces.

Instead in this case it’s Alan Jones. 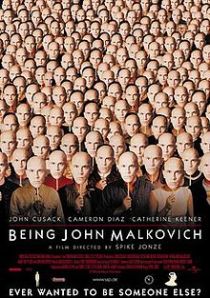