In 1945, Maraquita Sargeant, a young teacher and concert pianist living in rural Victoria was admitted to a notorious lunatic asylum north of Melbourne.

Here she would remain for the next 22 years, incarcerated against her will and tragically, completely sane.

Years after her release in a more enlightened and less cruel age, psychiatrists would describe Maraquita as being nothing more then “mildly eccentric”.

Her ‘lunacy’ in 1945: not wanting to have any more children.

Her youngest child, Tony, who was only 18 months old when his mother was taken away, calls the now empty lunatic asylum “black territory”.

“This is a black place. I don’t want to be here,” he says in a short video about his mother produced by Washington’s famous Smithsonian Institute.

This “black territory” is a place I have only recently discovered for myself.

It’s only a 20 minutes drive from where I live and somewhere I pass almost every day on my train ride into work.

Maraquita Sargeant (from the Smithsonian video)

For months I’d thought the majestic looking red-brick mansion rising above trees on a distant hillside was a country estate, perhaps built long ago for a Melbourne land baron.

It was only when I found myself standing outside its locked-up gates, staring up at the classically proportioned Victorian structure with its steep black roof, long-tall chimneys and large empty windows that its real purpose came into focus.

Known originally as the Sunbury Industrial School, the vast complex of mostly abandoned and decaying buildings was for over 100 years a lunatics asylum. It occupies almost the entire hillside of housing estate called Jacksons Hill.

In its most recent incarnation, until 2011, the asylum complex was a study campus occupied by Victoria University. Search online and you’ll find plenty of ghost stories.

More recently known as Caloola, the site’s history goes back over 150 years to 1864, when it became the site for one of Victoria’s  twelve ‘Industrial schools – institutionalised homes for delinquent or neglected children, that were a horror of diseases, death and discomfort in their own right.

The ‘Hospital for the Insane’ or ‘Sunbury Asylum’ was built in 1879 and then expanded over the next 40-odd years into a complex of 20 separate buildings, including a psychiatric hospital. 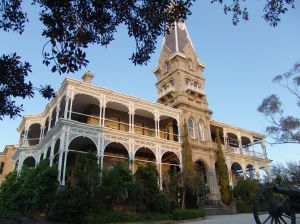 Rupertswood: Home of The Ashes

While the building of a modern highway has made Sunbury an outlying suburb of Melbourne today, back in the 1870s, Caloola asylum inmates would have felt very isolated from the wealth and power of boom town Melbourne, then one of the richest cities in the world thanks to the Victorian Gold Rush.

This separation was of course deliberate – people considered ‘mad’ in those days like Maraquita Sargeant were locked up far away from the chattering middle-classes, often to be forgotten about or no longer mentioned (except in whispers) by their own families.

This is black territory, a dark place of menace.

According to the VHD,  the purpose built Sunbury asylum with its “pavilion wards in brick with terra cotta roofing tiles conformed to international standards of asylum and hospital planning adopted in the later nineteenth century”.

“Caloola is of historical significance for its physical fabric and spaces which demonstrate nineteenth century attitudes to the treatment of mental illness, including the padded cells, ripple iron cells and dormitory accommodation.”

An inmate of Sunbury asylum, in what appears to be a strait jacket

In the Smithsonian video, Tony Sargeant enters one of the claustrophobic former padded cells, the cushion lining peeling back from the wall like dead skin adding to the sense of horror. In another, he finds the large empty former linen room, where his mother spent her days monotonously patching up sheets and pillow cases.

“That was her big job in life. Even though she was a concert pianist,” Tony says.

Caloola remained a mental institution and training hospital until 1985 when it housed intellectually handicapped people.

From 1992 to 2011 it was a campus of Victorian University. Some of the building are still in use as a primary school, radio station, art gallery and theatre company.

For a while – after the university campus closed – a passionate local lady called Julie Mills and her husband ran popular two-hour guided tours of the asylum buildings providing insights into how the facility operated and how patients were treated at the time.

Ms Mills told the Sunbury Leader in November 2015 she wanted to shine a light on the mental health system in those days, and how it has changed, and tell the stories of some of the people treated, often harshly, within its walls.

“A lot of the Sunbury asylum history is about stigma and it is something that was buried in family histories,” she said.

Often people – many of them women – were placed into the asylum for conditions that today would be compassionately treated like post-natal depression,  or for just being drunk and disorderly.

In the case of Marquita Sargeant, she was denied her freedom – and later sent for a failed lobotomy at the Royal Melbourne Hospital – because a director at the asylum deemed her “a threat to certain prominent people’s reputations”.

I found countless other example of the cruelty, deviancy and filthy conditions that were part of asylum life for inmates, right up until the 1990s when the asylum housed mental patients, many of whom were abused or over-medicated.

A newspaper article that appeared in the Melbourne Argus in December 1881 reported on investigations into the lecherous behaviour of the asylum superintendent at the time Albert Baldwin, after he had a 17-year-old girl Agnes Simmonds visit him in his office, where he locked the door.

“The patient was alone with Mr Baldwin in his officer for some time,: testified William Walker, the asylum storekeeper and clear.

“Eventually she left with the attendant. Baldwin then called me in, and I found him in a flurried state. He pulled up the blind of his window, washed his hands and face and brushed his hair. The patient Simmonds left on the 5th September and I believe has gone to New South Wales.”

A feature article on Sunbury Asylum that appeared in The Age newspaper in 1999 talks of  Elizabeth Kennedy, 31, a suicidal dressmaker, who spent 7200 hours “in seclusion”, from 1894 to 1896 which meant she was forced to wear a camisole – the notorious straitjacket – and webbed trousers daily.

“A woman in seclusion also wore canvas gloves shaped like oven mitts.  Many of the inmates died of pneumonia and, in the early years, they were given cold baths. Difficult patients were deprived of dinner,” the article says.

Last May, Jackson’s Hill and asylum complex was acquired by the State Government’s Development Victoria.  However, plans to turn it into a community, arts and cultural precinct appear to have stalled.

Instead, it stands still and empty, a decaying and ghoulish Dickensian shrine to those who suffered unjustly and often terribly behind its walls.

As for my mistaken belief that this hillside of horrors was a majestic country estate, I can take some solace from a 1996 article in The Age newspaper, in which the writer described Caloola’s gardens, open-air pavilions, and curved ha-ha walls as having a “beauty that seems at odds with their original purpose”.