Recently, whilst browsing an old folder on an external hard drive, I came across a copy of a warning letter I received – my first and only one to date – almost 10 years ago.

I had completely forgotten about it, even though at the time it set off a boiling and bubbling rage inside me.

I received the warning three years into a stint at a publishing company in Sydney where I was then the managing editor of two mortgage broking titles.

Up until then it had been a largely enjoyable job (and I still have mostly fond memories).

I ran a small team of reporters and there was a good collegiate atmosphere among fellow editors and journalists.

I did a fair bit of the writing and also penned a popular industry gossip column called Insider that put a satirical slant on some of the more colourful aspects of what was then a largely unregulated and lively industry.

Then one winter’s morning in early June it came as a great shock to be called into a meeting without any prior warning to be hauled over the coals and threatened with the sack.

Perhaps because I was so shocked and angry,  I don’t remember what was specifically said at the meeting.

The letter, which I had scanned and saved for some reason, filled in the blanks.

Beginning with a “first and final warning” management expressed its disappointment at my “editorial approach” on a “few recent occasions”.

In particular, there were concerns about two stories I had written in the Insider section “that explicitly criticised Westpac for poor customer service. These had been withdrawn at the last-minute”.

Similarly a reader’s letter which criticised St. George Bank “an advertiser” was pulled whilst another article which was critical of the Commonwealth Bank was altered lest it upset an “advertiser/sponsor”.

The last example related to PLAN Australia, a mortgage aggregator now part of National Australia Bank that advertised heavily in both publications.

The then CEO (with whom I’d had a good relationship with till then) complained to management after his company ranked poorly in a survey of them and their competitors.

Such was the outrage of this particular CEO that both the managing director and sales director had to fly to Melbourne to “smooth things over”.

I suspect that it was after this trip, which I was entirely unaware of, that it was decided that I be set straight. Up untl then, no issues had been raised about how I put together the publications, or my management style.

The warning letter made the point a number of times that it was part of my role to “drive” or “fulfil” the “commercial objectives” of the publications.

As an editor and not a publisher or salesman, I understood this to mean to put together a quality publication that everyone in the industry read – not just dollop out flattering articles about advertisers.

In the past, there had been some tension between my somewhat idealistic notion that editorial and sales remain independent and the company view that advertising in the papers gave you a kind of protected status in its publications.

My view was that the publications attracted advertisers if they were well read and influential, not just by publishing fluff and drivel.

Perhaps there was some middle ground I didn’t see, but it was still greatly disappointing to me that the company had chosen not to defend a long-standing editor, but instead take the side of prickly banks and mortgage firms with their bulging cheque books.

In light of the Royal Commission finding into the financial services industry and the conduct of the banks, perhaps it is not that surprising that these financial institutions believed a bulging cheque book washed away all sins, an attitude that was seemingly not discouraged by my employer.

The outcome of both the verbal and written warning was that I was told to find “new angles and approaches” to stories or in some cases “avoid them entirely” (if presumably they were of a negative nature and involved an advertiser).

To add insult to injury, my end of year bonus scheme which in the past had been based on meeting all my deadlines, something entirely within my control, was changed to one based on both publication’s hitting their “six monthly sales targets’ – a metric over which I had absolutely no control.

Surprisingly (well maybe not, I needed a pay cheque) I stuck around until March the following year,  when I left the company to go traveling with my wife, after we got married in January.

It’s interesting looking back on that day almost 10 years later in light of how my career has progressed, especially the last five-and-a half years, writing for a national newspaper (The Australian Financial Review), where editorial independence is taken for granted  – where journalists write stories and sales people sell ads. I believe that is the way it should be, in all cases. Publications that break that golden rule should disclose it to their readers, and not claim to be independent and objective reporters and observers..

In early 2011, back from a year travelling around the world and almost broke, I  was earnestly looking for full-time employment.

I put in a myriad of job applications for journalism roles, and was lucky enough to secure a few interviews including one with the publisher of an adventure magazine.

The interview was in one of those trendy converted warehouse in South Melbourne with the magazine’s publishers – an equally trendy man and woman duo.

I didn’t get the job – perhaps the publishers sensed I wasn’t really that enthusiastic about reporting on cross-country skiing  – but what I remember most vividly was a question I was asked.

It went something like this: Was I comfortable with the fact that the cover of the magazine was chosen, not by the editor or publisher, but by an advertiser?

Desperate for a job, I said I was, but my insides twisted into knots at the thought that this consumer magazine was essentially glorified advertorial, without of course telling paying readers that.

Looking back I am grateful I was never offered the role. I am also glad I stuck to my guns at my earlier role and tried to always report accurately and independently.

Hopefully readers appreciated it too. 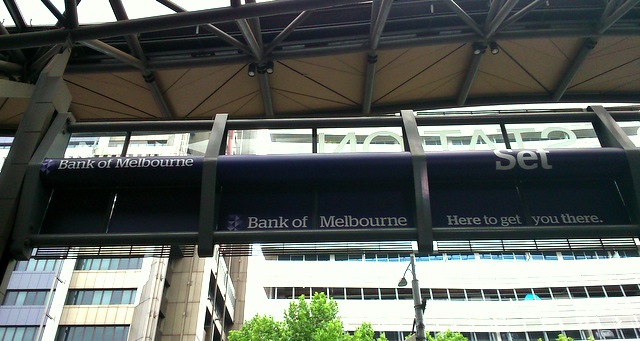 Had the train station become a bank branch?

That’s sort of how it felt walking through Melbourne’s Southern Cross Station every morning on my way to work this week.

Ascending the escalator from the platform I’d see enormous Bank of Melbourne posters dangling from the steel girders high above the tracks and a Bank of Melbourne billboard on the wall as I reached the mezzanine level. All space not occupied by a retailing brand bore the bank’s purple colours, logo and name including the fencing around the tracks, the staircase, more billboards at the main entrance on the busy corner of Collins and Spencer and even a Bank of Melbourne ad just below the roof a couple of stories up. 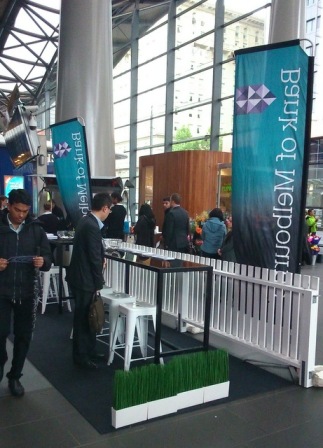 I duly queued up. The coffee was crap and the bean grinder broke down – I’ll avoid the temptation to draw comparisons with bank service in this country and instead ponder what’s actually going on.

I went to the website of Southern Cross Station and clicked on the button marked “Advertising“. The page contained this message:

If you would like to advertise your business or services at Southern Cross Station, contact JC Decaux.

Just who is JCDecaux? It’s a French-based global ‘outdoor’ advertising giant specialising in selling advertising space across three divisions: transport, billboards and street furniture. In 2012 it earned nearly $3.8 billion revenue. It employs over 10,000 people and is the largest outdoor advertising agency in the world. The second biggest is a US company called Clear Channel Outdoor with revenues of $3.16 billion. 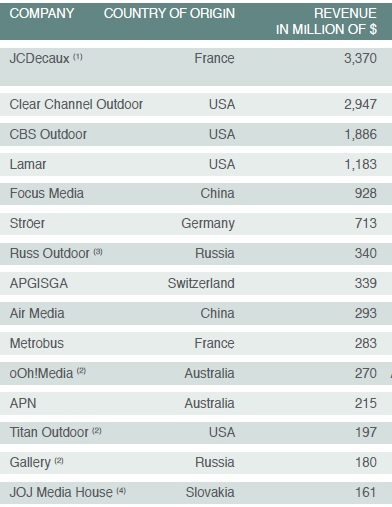 Australians see all of these company names everyday. Guaranteed. You may not notice them – the intention is not to promote them but the ad itself – but they will be somewhere on the billboard or poster. Like this one:

Unlike the dominant forms of advertising – television and radio – outdoor advertising is almost subliminal, somewhat Orwellian.

Your eye registers the ad as you rush past it in the station, at the airport, while you’re waiting for a bus. Perhaps you even stop to ponder it, but more often than not you barely even notice. Next thing, you’re craving a hamburger even though you just ate or a new mobile phone, despite their being the latest model in your pocket. More than likely, you’ve been influenced by a piece of outdoor advertising you barely even noticed, but processed sub-consciously.

The JCDecaux annual report provides some fascinating insights into the ubiquitous-ness of outdoor advertising and its ‘out there, but not really there’ dichotomy.

For example, did you know that street furniture advertising products include all of these: bus shelters, public toilets (blokes, you know the ones when you’re having a slash), self-service bicycle schemes, kiosks for flowers or newspapers, public trash bins, benches, citylight panels, public information panels, streetlights, street signage, bicycle racks and shelters, recycling bins for glass, batteries or paper, electronic message boards and interactive computer terminals.

JCDecaux’s billboard advertising includes the M4 Tower, the UK’s tallest
purpose-built advertising structure at 28.5 meters tall, as high
as a seven-storey building on the main highway to Heathrow Airport from London.

How does JCDecaux  and Clear Channel get access to these public spaces? Generally it negotiates an agreement with city authorities and either pays them a fee or a percentage of the revenue they earn from the ads they sell.

Something to think about the next time you get a strange craving or find yourself staring at one of these, while urinating in the airport toilet: