When Kevin Anderson surprised everyone and made it all the way to the US Open final – where he was naturally summarily thrashed by Rafael Nadal – it reminded me of a sporting moment, surely deeply etched in the memories of many fellow South Africans (where ever they may live) when Kevin Curren beat both Jimmy Connors and John McEnroe to reach the 1985 Wimbledon final during the dark days of apartheid.

Like Anderson, Curren was playing the tournament of his life, sending down aces at will and demolishing everyone on his path to the final. Such was his form that he beat Connors and McEnroe in straight sets.

But unlike Anderson, who no one really gave a snowball’s chance of beating the great Spaniard Nadal, Curren was expected to prove to experienced for the raw talent that was Boris “Boom Boom” Becker, a 17-year-old, unseeded, copper top German who had stunned the tennis world by just making the final.

Kevin Curran in the 1985 final

I remember sitting in our lounge in our Germiston family home in the old Transvaal surrounded by uncles, aunts and cousins watching and hoping the gangly Curren would do the isolated nation proud by winning the biggest title in tennis.

Sadly it was not to  be: Becker, riding on a wave of teenage punk energy, powered his way to a four set win over a shell-shocked Curren, who couldn’t bring his A game to hallowed centre court of Wimbledon.

I can still see my 12-year-old self sitting on the brown and gold patterned sofas my parents held on to for ages, hoping that mild-tempered Kevin Curren could fight his way back against tennis new wunderkind.  (There is a photo somewhere of all the family, uncles and cousins crammed into the lounge watching the final in what became a Sunday afternoon ritual in the 1980s).

I am not sure if I even realised it at the time that Curren had become an American citizen but to us, he was a South African hero.

Having young kids and been stuck in a different timezone meant I never watched any of this year’s US Open – apart from some highlight packages – but I was still excited to hear that Anderson, who bears some similarities to Curren with his skinny, long-boned physique and a killer serve – had made it all the way to a Grand Slam final. (The last player to get even close was the super talented, but poorly tempered Wayne Ferreira who made the semi-finals of the Australian Open twice).

By contrast I was addicted to the television screen during the two weeks of Wimbledon every July, and more so that year as Curren surged on.

It was one of the few global sporting events where South Africans could still compete against the best in the world. By contrast cricket and rugby union, my two other passions, were strictly domestic affairs, peppered by the ‘rebel tours’ as we remained banished until the early 1990s.

Wimbledon was also was also one of the few international events we got live on our TVs for some reason (there was no Olympics or World Cup coverage). The commentary was provided every year by tennis greats Bob Hewitt (who was much later shockingly convicted of rape) and his doubles partner Frew McMillan (I think).

I remember in the cold July afternoons taking breaks from school studies to watch just one game, just one more point in the tennis and ending up staying in the living room for hours. In the end it was 5pm and I’d watched the whole match and done no school work at all.

Thinking back in the hazy past, watching Kevin Curran play in the 1985 Wimbledon final is among a host of sporting moments I remember vividly from my apartheid-era childhood.

The others were of course Gerrie Coetzee knocking out Michael Dokes to become world heavyweight boxing champion (“We have a new, heavyweight champion of the world” I can still remember the TV announcer calling out), listening on the radio when tiny Zola Budd got horribly entangled with Mary Decker in the 3000 metre race at the 1984 Los Angeles Olympics (where she ran barefoot as a hastily ordained Brit and finished 7th), my beloved Transvaal rugby team losing numerous Currie Cup finals and numerous cricket memories, not least of which was the great, late Clive Rice yorking successive Australian batsman in a 1980s Kim Hughes rebel series and in the early 1990s Jonty Rhodes managing to hit 7 off the last bowl in a domestic Day-Night game between Transvaal and Natal, when Richard Snell bowled a chest high no ball. 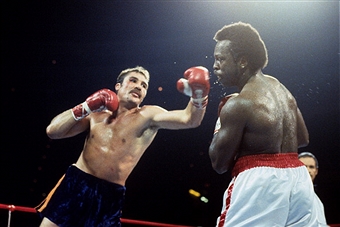 Surprisingly though, despite the heartbreak of Kevin Curran’s defeat, I became a huge fan of Boris Becker and can equally remember the three successive finals he played against the great Swedish maestro Stefan Edberg, one of tennis’s great rivalries – with Edberg winning two of them in 1988 and 1990 and Becker triumphing in 1989.

I’ll end on a nice bit of trivia.

In writing this blog, I came across an interview with Kevin Curren on The Guardian website, where it transpires that he went to a Bruce Springsteen concert in London the night before the final, so confident was he of winning!

“You may laugh but it was unbelievable,” said Curren, who said he was not much of a concert goer, but that Springsteen was “the man right then.”

Perhaps a better night’s sleep and my childhood sporting memories would have been a lot more rosier.