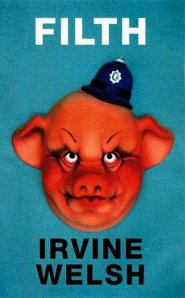 “Failure is much more interesting to me than success,” said Trainspotting author Irvine Welsh in a recent talk I attended in Melbourne

“I write about people who are going through a bad time, when things are falling apart. I try to show these characters grasping for the light switch,” he said in an attempt to explain the grim reality of many of his characters.

In the case of Scottish Detective Sergeant Bruce Robertson, the light switch might as well have been in Hawaii, in an abandoned, graffiti stained warehouse where the power has long been turned off.

He is beyond hope of redemption, right from the very first pages:

After two fruitless strikes I feel a surge of euphoria on my third as his head bursts open. His blood fairly skootches out…

Robertson its an utterley despicable character. A murderer, a rapist, a racist, a misogynist, a betrayer of his friends and family, a drug fiend, an alcoholic, a rabid consumer of pies, chips and deep fried food; a man with eczema-encrusted genitals that rise at the slightest whiff of sexual conquest, who retreats to the bathroom to give his itchy anus “a good clawing”.  Into the mix, throw in a distinct lack of interest in personal hygiene, fetishes that include erotic asphyxiation (strangulation sex) and a side interest in bestiality, and you get a pretty good picture of DS Bruce Robertson.

And yet it’s an enjoyable book to read mainly because Robertson is an entertaining, wise-cracking first person narrator who speaks directly to his reader without any sense of remorse, who plots the downfall of his work colleagues, friends and adversaries with Machiavellian cunning. One enjoys his scheming and plotting in the same manner as one enjoy Blackadder and his many “cunning plans”.

At the heart of it all is a man who hates everything but his own shadow, driven by a burning rage that will not cool:

I hate them all, that section of the working class who won’t do as they are told: criminals, spastics, niggers, strikers, thugs, I don’t fucking well care, it all adds up to one thing: something to smash.

Robertson is a voyeuristic release for every bad thought a (male) reader has ever had (and yet there are also female fans of this book).

There’s a guilty pleasure in allowing Robertson to enter your head, knowing that you can close the book and return to the real world where hopefully some sense of morality and decency remains.

Perhaps this is partly why Welsh wrote it, to get all his inner demons on the page to expunge the Bruce Robertson buried in his pysche. Either that, or it’s an opportunity to write about a character who remarks during a bout of sex with an Amsterdam prostitute:

I’ve given the pole a good greasing but she’s pretty tight. Once I get in though, it starts to slide up. I can tell that she’s in a bit of distress cause she’s making hissing noises and her back muscles are tensing, but it’s probably  just cause the fucking hoor’s loving every minute of it.

These type of graphic descriptions dominate the book in between heavy bouts of drinking, drug taking and “hooring”.

The female degradations inflicted by Robertson reminded me of a question a woman asked at the same talk Welsh gave in Melbourne. She asked him about his depiction of woman characters and whether there was something misogynistic about it?

At the time I scoffed at the question, but having read Filth, I’ve reconsidered.

Women are the chief focus of Robertson’s humiliations. They are reduced to play things without feelings or emotions. They are objects for his pleasure and derision most horrifyingly illustrated in a scene I won’t even dare to quote where Robertson drives a prostitute to an isolated farm to have sex with a sheep dog.

It was this scene where – out of sheer revulsion – I considered putting the book down.

Trainspotting was Welsh’s first book and I wager – though I have only read it and now Filth – his finest by a country mile. Trainsportting was  a brilliant depiction of the post-Thatcher generation lost to drugs. A modern classic.

Filth is almost pure literary pornography with an enigmatic villain unlike any created in fiction who engages in every possible depravity. There’s whiffs of Trainspotting in Robertson’s occasional hilarious commentary on Scottish football, tabloid journalism (Robertson is a big reader of The Sun – for the football and the girls on page 3) restaurant food and local politics. But it has little gravitas and nothing meaningful to say about the society that created such a monster as Bruce Robertson.

Yes, we learn something of Robertson’s motivations and inner psyche –  through a tapeworm in his bowels that speaks in Queen’s English. But in the end and upon reflection, I tend to agree with what The Observer book critic Alan Taylor wrote of the novel when he reviewed it in 1998:

“As an archetype, Robertson is over the top. Welsh slips so easily into degradation mode that pages slip by in wodges, a miasma of pornography that is mindnumbing…Welsh lets him sink so low he is not resuscitable. For such a man, the idea of redemption seems risible. His sin goes beyond breaking the law. Guilt, ultimately, is the least of his problems. He has committed the cardinal crime. He is a crushing bore.”

2 thoughts on “What’s to really like about Irvine Welsh’s Filfth?”