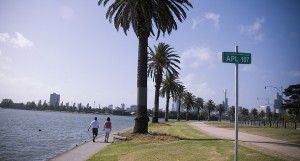 The alarm goes off at 6am on a chilly Sunday morning.

Today I’m running the City2Sea, a 14 kilometre charity run through the streets of Melbourne, starting in the CBD and ending at St Kilda Beach.

For the last two months, I’ve been getting up at the ungodly, still-dark hour of 5.30am to train before work – and I feel ready.

A quick nappy change (the baby’s, not mine), a small bowl of muesli , a kiss goodbye to the sleepy wife and I’m off, driving along Oak Park’s quiet suburban streets on my way into the city.

The radio says it is 9 degrees celsius  (in November!) and I have the heater cranked up in the car.

It’s a even colder in the city where I park, munch half a banana, and set off up Flinders Street for the start line just off St Kilda Road.

Runners emerge from everywhere, with their race numbers pinned to their shirts, they’re easy to spot. Also on the streets, late night/early morning revellers outside 7-Elevens and the homeless. A man outside Flinders Station asks me for change and I literally don’t have any. Just a bank note stuffed into my sock for a bite to eat after the race.

I meet up with my friend Jonny outside the colossal, fortress-like grey walls of the National Gallery of Victoria and we jokingly discuss strategies for elbowing people out the way at the congested start line.

The vibe is great, surrounded by fellow Melburnians of all ages, shapes and creeds chatting away, stretching, waiting to test themselves.

Music belts out and a loudspeaker barks out instructions and bits of motivation. Later the same voice tells us repeatedly to “get into our pens”. Since when did we become farm animals?

Today is also Remembrance Day and we listen to a short address about the bravery of Australian troops in the war and listen to the bugle poignantly play “The last post”.

The sky is clear and the air crisp as we stand in silence and listen to the sorrowful tune.

Afterwards, as we wait for the start gun, Jonny fumes at all the runners with their ipods strapped to their arms and plugged into their ears.

He was under the impression these devices were banned.

“I might have to steal someone’s headphones,” he chirps, clearly not impressed.

A lady in front of me has two ipods, one strapped on each arm. Is she using them as weights I wonder or planning to teleconference while running?

Someone is lined up in their tuxedo. Another as a super-hero with red cape (not superman, they’re advertising a gym or slimming plan I think).

The gun goes off and we’re off, racing under a canopy of trees down St Kilda Road past some of Melbourne’s most expensive apartments blocks shimmering in glass and metal and old Victorian and Edwardian heritage buildings transformed into royal societies and restaurants.

People jostle past. Apologies are muttered. A woman runs past me actually holding hand weights in her hands.

A man on a Sunday stroll with his dogs asks a race official how he gets across the road.

We pass the grey stone bricks of the Victorian army barracks, where a rock band all dressed in naval white is pumping out tunes and people cheer at us from the pavement.

At the base of one of the apartment blocks, in a cafe, a bald guy with a newspaper is having breakfast, oblivous, it seems, to the sea of joggers flying past.

The “1km” sign looms up in no time and I start thinking – “this will be a breeze!”

Some people are walking already and I wonder – just how much training have they done?

Already I’m thinking my next race should be a 21 kilometre half-marathon.

A few kilometres later – I’m managing about six minutes a km – and we’re in Albert Park, where they hold the Australian Grand Prix in January.

The sun is blazing, it’s a gorgeous clear blue sunny day and Melbourne’s impressive “Manhattan” shimmers in the distance. The city looks majestic from my point of view and I feel grateful to be fit, to be running and to be a small part of this metropolis.

But there’s absolutely no shade and as I slow down for a cup of water, I’m thinking pehaps 14 kilometres is more than enough after all!

A black swan has waddled across from Lake Albert and is calmly eating grass at the side of the road. A bad omen? Don’t these things chase and bite?

A woman runs past in the opposite direction. Perhap’s she’s finished already and doing the race backwards.

An elderly man next to me is doing a kind of half run/half walk, dragging his legs forward and moaning with each breath. I’m worried he might not make it (and not just to the finish line).

We pass the main Grand Prix grandstand and I look up at my reflection in the glass. Never mind the man with the funny running style, it looks like I’m hardly moving at all or possibly going backwards.

The heat, the heat.

This course may be as flat as a pancake, but there’s absolutely no shade. I look for tall, wide joggers.

I see what I think its the first ambulance at the 9 kilometre mark and assume the odds favour heart-attacks well into these races. Indeed the frequency of first-aid care picks up from here on in. God help you if you collapse at the 2 km mark, you’re finished!

The “Village People” are playing in front of a tent promising to cool you down with water sprays and I detour in, but the misty stuff hardly penetrates, taking seconds off my time, which has now stretched beyond the six minute per kilometre mark.

A few minutes later I’m forced to slow down again for a glass of gatorade. Everyone crowds in grabbing for a cup.

Have you ever tried drinking gatorade while running? Luckily I remember it’s gatorade and don’t throw it across my face as I did with a cup of water earlier.

We exit the park and head down Fitzroy Street, St Kilda with its cafes and restaurants and art deco apartments. Three guys on a balcony are drinking beers and waving at us. Bastards!

A little further along a couple of down-and-outs are gathered together with cheap grog, sitting on the kerb shouting out words of encouragement:

“$20 for a blow-job,” shouts out one with a leathery, unwashed face, clearly not fazed by the presence of three uniformed police officers watching from across the street.

“They’re not doing any harm,” I hear a guy tell the cops, who are clearly not impressed.

Not sure the mothers and daughters running behind me will appreciate these words of encouragement either.

I’m just glad for something to divert my thoughts.

“$20 for a blow-job,” he repeats again and again until I am out of earshot.

And then it’s a left turn down the esplanade with the beach on my right and beyond it the calm blue waters of Port Phillip Bay. A guy paddles serenely by standing on a paddle ski. Cyclists ring their bells and whizz past on the track alongside the road.

Two “smurfs” run past me.

And then a man in a sequined purple dress and wig.

People holding babies and dogs on leads wave and shout out words of encouragement.

A lady smiles at me: “You’re doing well” she says and I think: I must look pretty bad.

The man I thought might have a heart attack at the half-way stage surges past me and out of sight, still moaning. Bastard!

And then the finish line looms. I pick up speed and cruise over the line in an hour and 27 minutes. Not too shabby.

I grab a medal and thrust it over my head. To the finisher, the spoils. 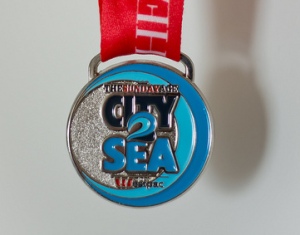 We ditch the free yoghurt on offer and hobble off to Acland Street for well-earned full English breakfast with all the trimmings.