The letter was addressed to “L Schlesinger” with my home address printed on top and began with an apology for this “unsolicited” correspondence.

“My name is Barrister Mateo Pinto of St. Mary of the Head 15, 28045, Madrid Spain. I got your contact information through the Australian public records while searching for the last name similar to my late client.”

His client, now deceased, was ‘Albert Schlesinger’, an oil magnate who lived in Spain for 28 years and who died along with his immediate family in an “auto car accident on the Damascus Highway in Syria in December 2004”. 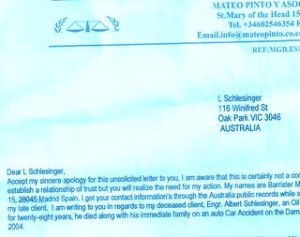 The letter went on to detail how there was US$9.6 million unclaimed in a vault at the Madrid Central office and that he was seeking out a relative that shared the same last name as his client.

Having found me, he was willing to share the spoils – though 60:40 in his favour.

All I had to do to get the ball rolling was send him a fax or email, but he also provided a phone number though he suggested the first two means of correspondence for “time difference and confidentiality reasons”.

But I better hurry because, according to Barrister Mateo Pinto there is only “three months final notice from the safe keeping firm to present a beneficiary to the vault” or the money would be “forfeited to the Spanish authorities” – something that he “forbid happening”.

The letter was signed with an indecipherable signature and clearly a photocopy.

Obviously, this is a scam and not a very convincing one despite the effort to create authenticity with the posted letter and stamps (and perhaps also playing the part of the greedy lawyer by demanding a 60: 40 split in his favour).

I did some Google searches anyway to placate my curiosity.

The street address on the letter does not exist.

The only Albert Schlesinger of note I could locate died in San Francisco in 1993. His New York Times obituary says he was a civic leader and “founder of one of the largest automobile dealerships on the West Coast”.

There is no Damascus Road, in Syria, though there is one mentioned in the Bible.

And as for Barrister Mateo Pinto of St. Mary of the Head, there is an architect of that name residing in New York and a legal case in the Philippines involving a ‘Mateo Pinto’ who leased a fish pond, but that’s it.

Of course even without the help of Google, there are holes in the story as wide as the Grand Canyon.

For instance: why does he say he comes from Madrid, but posts the letter in Barcelona, on the other side of the country?

And what lawyer would look to give 40% of $9.6 million to someone he’d never met just because they shared the surname of their client?

I found many similar examples with almost the identical plot structure, including one on the Australian government’s SCAM watch website from a Spanish lawyer, whose client had died in a car accident with the recipient offered the  chance to share in $22 million, (though in this letter, the lawyer is more generous willing to share the spoils 50:50).

Does anyone actually fall for these silly scams?

Still, it got me thinking about the person who gone to the trouble of buying the stamps and posting this letter half way around the world in the hope that I’d reply and presumably end up handing over my bank details so that he can steal from me.

Somewhere, in Spain, probably Barcelona, there is a guy posting letters to all the Schlesingers he can locate in overseas phone directories.

Why did he pick Schlesinger? Well there are some very wealthy Schlesingers I believe, sadly I am not one of them, so perhaps that’s why he picked the name. Perhaps he’d also considered the more famous Oppenheimer, Getty or Rothschild surnames for the name of his fictitious client.

I imagine the scam artist hunched over a computer in some darkened flat in a non-descript suburb on the outskirts of Barcelona. The printer whirrs and buzzes as it prints out letter after letter. He bends down, picks up each letter and has a cursory look over it to check it’s printed correctly, folds it neatly and slips it into an envelope. He licks the stamps and presses them onto the envelope firmly. Later, when he has a big enough pile, he heads off late at night, walking along quiet streets, a cigarette dangling from his lips (don’t all villains smoke?) and drops the letters into the nearest mail box, looking around suspiciously as he does so in case someone has finally tracked him down. Then he disappears down a narrow lane, finds a cheap bar that stays open late, orders a beer, finds a seat in the corner, where he sips his cerveza, lights up another cigarette, puffs out a cloud of smoke and dreams up his next scam.

Or perhaps he’s some 16 year old nerd with pimples and a computer.

18 thoughts on “An unexpected letter arrives from Spain”